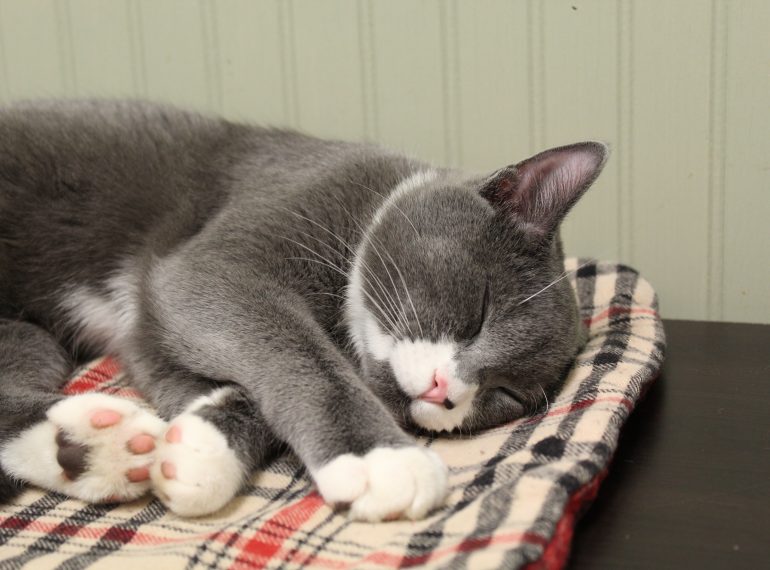 As spooky season gets underway, allow us to introduce you to a cat that brings to mind all the thrills and trepidation this time of year has to offer.

For those familiar with the gothic novella from where he gets his name, Hyde meets expectations. Not in the sense that he has a string of crimes on his conscience, but he is a bit of an oddball, especially in comparison to his brother, Jekyll. Where Jekyll is outgoing and affectionate, Hyde has taken his time coming out of his shell. He needs slow introductions, and will flee if approached quickly, or even if you hold direct eye contact with him for too long.

Yet despite all the wide-eyed stares we’ve received from this gray tuxedo cat with the two-tone nose, his socialization has improved. If given the chance to approach and sniff a relaxed hand, he will rub against it to indicate he wants to be touched. While clearly wary, sometimes it seems like he just forgets he likes to have his head pet and ears scratched because once he gets into it, he hums one of the loudest purrs we’ve ever heard.

At only 5 months old, we think he has plenty of time to become more like his “better half.” In fact, as this is written, Hyde has settled himself next to the computer of his own accord. He’s watching everything closely, but he’s more comfortable now than when he first arrived in June, where the most common place we found him was tucked into one of the storage closets.

For more information about Hyde and our other adoptable pets, please click on the Adopt menu above where you will also be able to complete our online adoption application.